H-France ·
@HFranceWebsite
Happy Anniversary to this incredibly generous and helpful podcast. We've learned so much from the hours and hours of informative conversations! https://t.co/HwnnftoMQi
View on Twitter roxanne panchasi@rpanchasi
9 yrs ago today, the first ep. of @NewBooksFrance went online. I'd pitched the new podcast a month or two before & asked one of my PhD advisors if she'd speak w/me about her new book, WHAT SOLDIERS DO.

A big MERCI to all the authors & listeners out there-you changed my life!❤️ https://t.co/fbepTPWGAD
0
16

H-France ·
@HFranceWebsite
check out this great interview! https://t.co/pKghNXyKiu
View on Twitter
roxanne panchasi@rpanchasi
My interview with @EichnerCarolyn re: THE PARIS COMMUNE-A BRIEF HISTORY (2022) is online now @NewBooksFrance & I don’t mean to be obnoxious or anything, but it is pretty damn great. Listen…

“What the Revolution Means Today”

I am delighted to introduce a series of exchanges around what the French Revolution means today. This series, spearheaded by Marisa Linton, commemorates the 230th anniversary of the Revolution, but also intends to inspire reflection on what the Revolution may continue to mean for us as scholars, teachers, and citizens.

Five of these interwoven strands follow (released as individual issues), each with contributions from four or five scholars. The first, “Rethinking the French Revolutionary Terror,” edited by Marisa Linton, challenges some of our pervasive assumptions as scholars and teachers of the Revolution. Contributors to this strand question whether it is useful to talk about the Terror as a coherent and capitalized event, and consider what violence and trauma meant at other moments of the Revolution.

“The Terror as a Difficult Past”
Ronen Steinberg
Michigan State University

In “The Revolution Abroad,” edited by Annie Jourdan, several scholars reflect on their own experiences researching and teaching the Revolution from outside France, including from the United States, Germany, the Netherlands, and Italy. They also consider how different national agendas and institutional contexts have shaped how—and how much—the French Revolution is regarded today.

“Revisiting French Revolutionary Culture,” edited by Sophie Matthiesson, turns our attention to material culture and consumption. Contributors ask us to think not only about the importance of objects and archives, but also to reflect on how choices made by collectors and curators have influenced the basis of what we know about, and how we understand, the Revolution.

A fourth strand, “Whose Rights? The French Revolution and the Present,” edited by Ian Coller, addresses what it means to engage with the history of the Revolution in our contemporary political and cultural world, from wrestling with questions of global history and activism in the classroom to the resonances of the MeToo movement and the rights of “living beings” writ large.

Volume 11, Issue 19
“Whose Rights? The French Revolution and the Present”
Edited by Ian Coller, University of California, Irvine

“Introduction: Whose Rights? The French Revolution and the Present”
Ian Coller
University of California, Irvine

“Whose Revolution? Rights and the French Revolution Today: A Perspective from the Classroom”
Pernille Røge
University of Pittsburgh

The last strand, “The French Revolution Beyond the Academy,” edited by Guillaume Mazeau, looks more closely at the continued powerful—if also sometimes problematic—presence of the Revolution in a myriad of contexts, from classroom games to political interventions to contemporary film.

“The Revolution and Me”
Jennifer Popiel
Saint Louis University

We conclude with a videoed exchange between Lynn Hunt and Peter McPhee reflecting on the ideas and questions raised in these various strands.

Volume 11, Issue 21
Discussion: “230 years after: what does the French Revolution mean today?: Reflections” 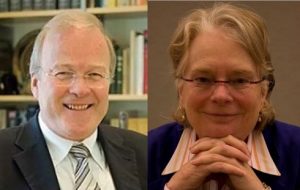 Overall, this series of salons was intended to include as diverse a range of voices as possible. We sought to bring together both relatively new scholars and well established people, Francophone and Anglophone scholars, and those from various parts of the world (including France, the United States, the UK, Australia, the Netherlands, Germany, and Italy.) There are many other people whose voices could—and should—have been part of this; we very much hope that this will spark continued conversations and exchanges! 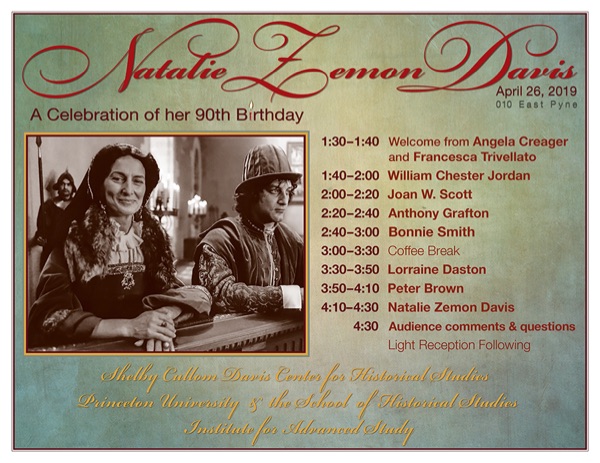 On April 26, 2019, Princeton University’s Shelby Cullom Davis Center for Historical Studies and the School of Historical Studies at the Institute for Advanced Study joined forces to celebrate the 90th birthday of Natalie Zemon Davis. Five former colleagues and friends paid tribute to Davis’s brilliant scholarship and intellectual leadership, then Davis herself regaled us with an account of her collaboration with the Lebanese-French-Québécois playwright and director Wajdi Mouawad, which brought an adaptation of her book Trickster Travels: A Sixteenth-Century Muslim Between Worlds to the stage. It was a dazzling event in a packed auditorium. We are delighted that the speakers, themselves illustrious historians, agreed to have their texts published on H-France Salon. 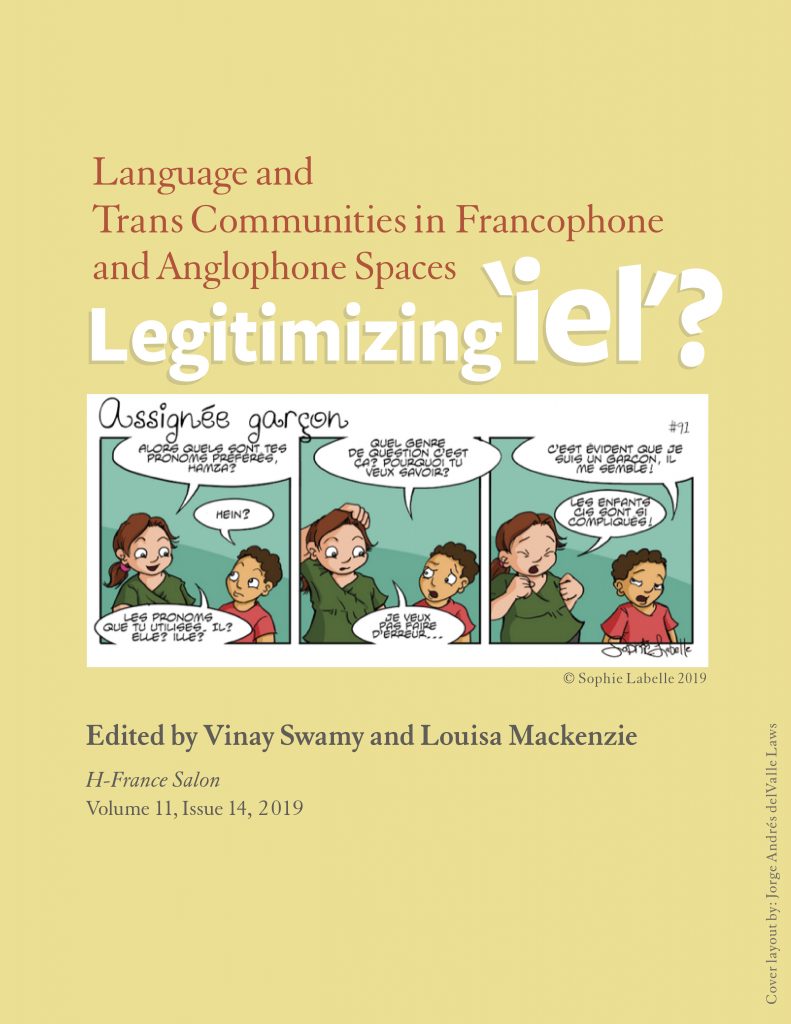 The last few years have seen an increased visibility of non-binary persons who are publicly claiming their identities and pronouns beyond the gender binary in both English and French. While the singular “they” has gained favor among many in Anglophone spaces due in part to the precedent for such a usage in English, Francophone non-binary persons have had to face further challenges regarding language and syntax given the binary nature of French grammar itself. This special issue considers recent attempts to make available gender‑equitable, ‑neutral, and ‑expansive language and identities to French speakers within linguistic, cultural, and pedagogical spaces. In offering to the readers of H-France our reflections on these developments, the contributors to this special issue expand on the fruitful exchange initiated at a symposium at Vassar College in April 2018—when earlier versions of this material were first presented—and invite dialogue with a broader public. In so doing, we hope that the questions we raise will be taken in the spirit of ongoing inquiry rather than as prescriptive positions (as indicated by the titular question mark), and that our chapters will be read as open-ended engagements with the rapidly-developing public conversations on non-binary issues beyond the academy. We also hope that the embedded hyperlinks and the appended glossary will allow our readers to engage directly, if they so wish, with the many multimedial resources cited in this issue.

H-France Webinar: “Democratic Problems in the Age of Revolution”
April 12, 2019

Roundtable: “Thinking and Acting Historically with Édouard Glissant”
Roundtable at the 65th Annual Meeting of the Society for French Historical Studies, Indianapolis, IN, April 6, 2019

Commentary by the audience

Muriam Haleh Davis, University of California, Santa Cruz, “Governing for the Market and the Question of Islam in Algeria, 1958-1962”
Video | MP3

Commentary by the audience

“Historians of the French Revolution and their Publics”
Panel session at the 65th Annual Meeting of the Society for French Historical Studies, Indianapolis, IN, April 6, 2019

Timothy Scott Johnson, Texas A & M University – Corpus Christi, “The War over Hearts, Minds, and History. The Role of the French Revolution in Counter-Insurgency Theory during the Algerian War”
Video | MP3

Michael Scott Christofferson, Adelphi University, “The Historian and the Think Tank: François Furet’s Presidency of the EHESS and the Origins of the Fondation Saint-Simon”
Video and MP3 forthcoming

“The Old Regime on Screen: Representations and Misrepresentations of Kings and their Courts in Film and Fiction”
Panel session at the 65th Annual Meeting of the Society for French Historical Studies, Indianapolis, IN, April 5, 2019

Charlotte Wells, University of Northern Iowa, “The Man Had Issues, But….: The Unfortunate Afterlife of Louis XIII”
Video | MP3

“Roundtable in Honor of Jack Censer”
Roundtable at the 65th Annual Meeting of the Society for French Historical Studies, Indianapolis, IN, April 5, 2019

“Cultural Exchanges Between France and the USSR”
Panel session at the 65th Annual Meeting of the Society for French Historical Studies, Indianapolis, IN, April 5, 2019

This special three-part series of H-France Salon seeks to create a space for the H-France community and beyond to critically re-evaluate how we address race and racism in our scholarship and research agendas, in our pedagogical practice, and in our professional institutions. As the struggle for racial justice in the academy and society at large in both France and the US has simultaneously been reinvigorated and come under increasing attack in recent years, we have found that many of our colleagues who have not focused on race and racism in the past are eager to engage with these issues now and are seeking tools, resources, and cutting-edge research. To that end, at the 2017 annual meeting of the Western Society for French History, Dr. Christy Pichichero organized a plenary roundtable on structural racism (the videorecording is available here), and Dr. Emily Marker facilitated an accompanying workshop on combating structural racism in the classroom. Based on the significant response to that programming, H-France approached us to continue and expand those initial conversations as guest editors of an H-France Salon.

The Salon is organized in three issues – one each primarily devoted to research, institutional and professional matters, and pedagogy – with the aim of encouraging our community of scholars to consider the significance of race and racism across all of these aspects of our everyday practice as academics. For the first installment, we asked a group of scholars to write short reflections on the state of their fields and to respond to one another’s thoughts in an online “conversation.” The contributors to this issue of the Salon are Dorian Bell, Madeleine Dobie, Éric Fassin, Abdellali Hajjat, T. Denean Sharpley-Whiting, Michael G. Vann, and Françoise Vergès. We urge you to share these exchanges widely with interested colleagues, students, and administrators, and we hope that you will continue to follow the discussion in the issues to come.

The essays in this issue, offered not only by Tackett’s contemporaries but also by former students and emerging scholars, give a rich picture of his legacy and the continuing impact of his ongoing work. If he has shaped our historical practice, it has been above all by bringing human choice back to the center in a way that preserves the structural insights of the work that preceded him. He has never located himself in any “school” or sought to build one, as the diversity of these papers reveals. Drawing on the best of the Annales approach, he has consistently emphasized the need to place the choices of individuals in a larger social context. Like the great proponents of the “classical” interpretation, he has been finely attuned to regional particularities, and the responses “from below” as well as those of elites. Responding to the linguistic and cultural “turn,” he has paid close attention to the ways in which people represent their experience, uncovering a wealth of largely neglected sources. Yet at the heart of Tackett’s work is the question—not so much “why,” but how historical actors make choices that in their aggregate make revolutions, civil wars, social advances and episodes of violence.

“Roundtable: Tim Tackett as a Mentor”

Part I: The Coming of the Revolution

“The Beginning of the Interregnum: The Origins of the Fusion of the Orders, 27 June 1789”
D.M.G. Sutherland
University of Maryland

“Deputies and Journalists in the French Revolution”
Jeremy D. Popkin
University of Kentucky

Part II: The Coming of the Terror

“The Power of Emotions: New Light on the Conventionnels and the Process of the Terror”
Marisa Linton
Kingston University