In the first webinar of the series, Maurice Samuels (Yale University) discusses his book The Betrayal of the Duchess: The Scandal That Unmade the Bourbon Monarchy and Made France Modern (New York: Basic Books, 2020) with Andrew Counter (Oxford University). 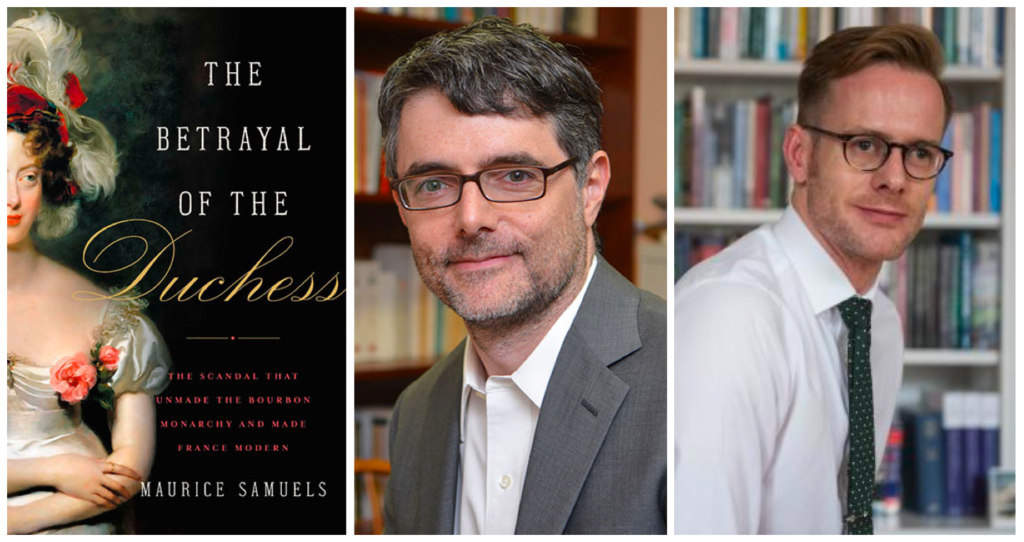 Hosted by the University of Auckland and Massey University

Conference Materials
(Conference materials for each week will be posted the Sunday of that week.)

“The Conception of Conservation and Protection of Natural Resources in Early Modern and Revolutionary France”
Panel Session at the 47th Annual Conference of the Western Society for French History, Bozeman, MT, October 5, 2019

Constance de Font-Réaulx, Johns Hopkins University, “The Question of Water Preservation and the Case of the Compagnie des Eaux Filtrées in Paris (1763-1791)”
Video

Commentary by the audience
Video

“Histories of Homosexuality, Labor, and the Police in Modern French History: A Roundtable in Memory of Michael Sibalis”
Roundtable session at the 47th Annual Conference of the Western Society for French History, Bozeman, MT, October 5, 2019.

“Shifting Grounds: From Profit to Patrimony in the Landes of Gascony, 1780-1980”
Keynote lecture at the 47th Annual Conference of the Western Society for French History, Bozeman, MT, October 4, 2019

“People, Power, and Passion in the Archives: Presentations in Honor of John Merriman”
Panel Session at the 47th Annual Conference of the Western Society for French History, Bozeman, MT, October 4, 2019

C. Kieko Matteson, University of Hawai’i at Manoa, “Lucifer Sticks and Briquets Bics – Arson as Environmental Protest in France Past and Present”
Video

Stephen L. Harp, University of Akron, “North Africans, Mass Tourism, and the Rebuilding of the French Riviera: Police Files from the Provinces”
Video

Commentary by the audience
Video

“Roundtable in Honor of John Merriman”
Roundtable at the 47th Annual Conference of the Western Society for French History, Bozeman, MT, October 4, 2019

Recent scholarly debates, student activism, and current events have sharpened conversations about race, identity, equity, and diversity in academia in France, the United States, and around the world. This second installment of the H-France Salon on Race, Racism and the Study of France and the Francophone World Today is dedicated to opening up frank discussion about how race and racism play out in academic careers and institutional spaces, from college classrooms and campus cafes, to professional association meetings and administrative offices. The issue features pieces by Tyler Stovall, Nimisha Barton, Mita Choudhury, Stephen L. Harp, Crystal M. Fleming, and Pratima Prasad writing in their multiple capacities as scholars, teachers, administrators, and consultants based in the United States, and it begins with a critical introduction to recent controversy on these questions in France.

(The first installment can be found here.)

“How to Be Less Stupid About Race in France”
Crystal M. Fleming
Stony Brook University

“Inclusion and Equity in the University: Reflections of a Teacher-Scholar-Administrator”
Pratima Prasad
University of Massachusetts, Boston