H-France ·
@HFranceWebsite
it's always nice to learn more about these great people! https://t.co/U4VSjTngoT
View on Twitter 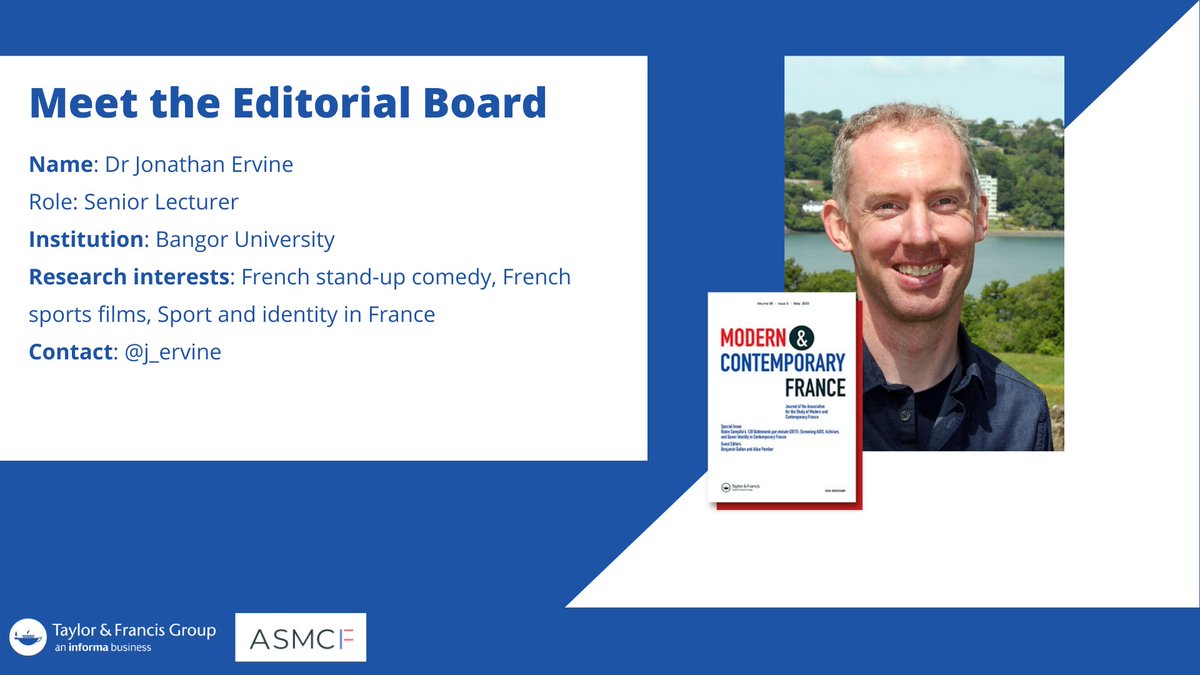 Modern & Contemporary France@FranceModern
Continuing our series of introductions to members of our Editorial Board, this week it's the turn of Dr Jonathan Ervine @j_ervine @BangorMLC Jonathan's research interests include sport and identity in France; French stand-up comedy & French sports films https://t.co/qkUrD0apwS
0
3

The Editorial Board of H-France invites applications and nominations for the position of H-France Editor-in-Chief. As H-France is the largest scholarly organization for Francophone history and culture outside of France, its Editor-in-Chief is in a unique position to build and deepen relationships among scholars and scholarly organizations across the globe, to speak on issues of professional concern to scholars of France, to promote and extend the rich tradition of scholarship about France and the Francophone world, and to help shape future scholarship, including emerging digital technologies, amidst the intellectual and political challenges of the 21st century.

The Editor-in-Chief is a volunteer position. H-France is a non-profit organization. Its services are available free-of-charge to its subscribers, and its work is carried out by teams of volunteer editors. The H-France budget, drawn from voluntary donations, covers the expenses the Editor-in-Chief incurs in this work.

Qualifications: The applicant should be an established scholar in French history, literary studies, or art history and be committed to open access publishing and to transcultural and transdisciplinary scholarship and collaboration. Strong interpersonal skills are essential. Exceptional organization skills and the ability to address and seek resolution to complex and multifaceted issues that affect interested parties and stakeholders are crucial. Technical knowledge of digital applications is not necessary; far more important is a creative sense of how digital technologies may be used to benefit scholarship and an ability to recruit a team of editors to pursue those ends.

H-France looks to select a new Editor-in-Chief by the beginning of 2020 so that they can shadow the outgoing Editor-in-Chief for a year prior to assuming the position in March 2021.

H-France encourages interest from all qualified individuals and will give full consideration to applicants without regard to national origin, race, color, religion, sex, sexual orientation, gender identity, or disability status.

For further details, see the job description below. The Editorial Board welcomes the nomination, including self-nomination, of individuals for the position of Editor-in-Chief. For further information about the position or to submit a nomination or application, please contact the Chair of the Search Committee: Carolyn Chappell Lougee, Department of History, Stanford University, Stanford, California 94305-2024 USA. lougee@stanford.edu

H-France is an internet-based organization that promotes scholarly work and discussion on the history and culture of the Francophone world. H-France’s operations, all staffed by teams of volunteer editors, include:

The Editor-in-Chief of H-France works under the authority of the H-France Editorial Board to: